The citron (Citrus medica) is a large fragrant citrus fruit with a thick rind. It is one of the original citrus fruits from which all other citrus types developed through natural hybrid speciation or artificial hybridization. Though citron cultivars take on a wide variety of physical forms, they are all closely related genetically. It is used widely in Asian cuisine, and also in traditional medicines, perfume, and for religious rituals and offerings.

The citron is an old and original citrus species. There is molecular evidence that most cultivated citrus species arose by hybridization of a small number of ancestral types, including citron, pomelo, mandarin and to a lesser extent, papedas and kumquat. The citron is thought to have been native to India, in valleys at the foothills of the eastern Himalayas. It is thought that by the 4th century BC, when Theophrastus mentions the "Persian or Median apple", the citron was mostly cultivated in the Persian Gulf on its way to the Mediterranean basin. Many mention the role of Alexander the Great and his armies as they attacked Persia and what is today Pakistan, as being responsible for the spread of the citron westward, reaching the European countries such as Greece and Italy.

The citron fruit is usually ovate or oblong, narrowing towards the stylar end. However, the citron's fruit shape is highly variable, due to the large quantity of albedo, which forms independently according to the fruits' position on the tree, twig orientation, and many other factors. The rind is leathery, furrowed, and adherent. The inner portion is thick, white and hard; the outer is uniformly thin and very fragrant. The pulp is usually acidic, but also can be sweet, and even pulpless varieties are found. The color varies from green, when unripe, to a yellow-orange when overripe. The citron does not fall off the tree and can reach 8–10 pounds (4–5 kg) if not picked before fully mature. However, they should be picked before the winter, as the branches might bend or break to the ground.

Citrus medica is a slow-growing shrub or small tree that reaches a height of about 8 to 15 ft (2 to 5 m). It has irregular straggling branches and stiff twigs and long spines at the leaf axils. The evergreen leaves are green and lemon-scented with slightly serrate edges, ovate-lanceolate or ovate elliptic 2.5 to 7.0 inches long. Petioles are usually wingless or with minor wings. The clustered flowers of the acidic varieties are purplish tinted from outside, but the sweet ones are white-yellowish.

The citron tree is very vigorous with almost no dormancy, blooming several times a year, and is therefore fragile and extremely sensitive to frost. 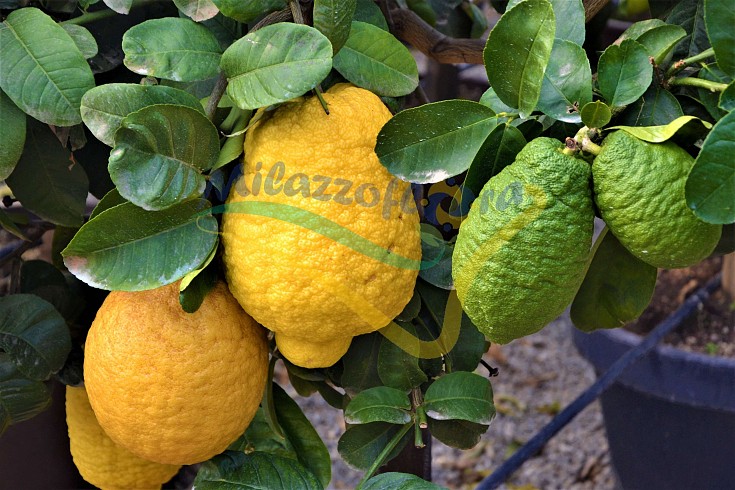 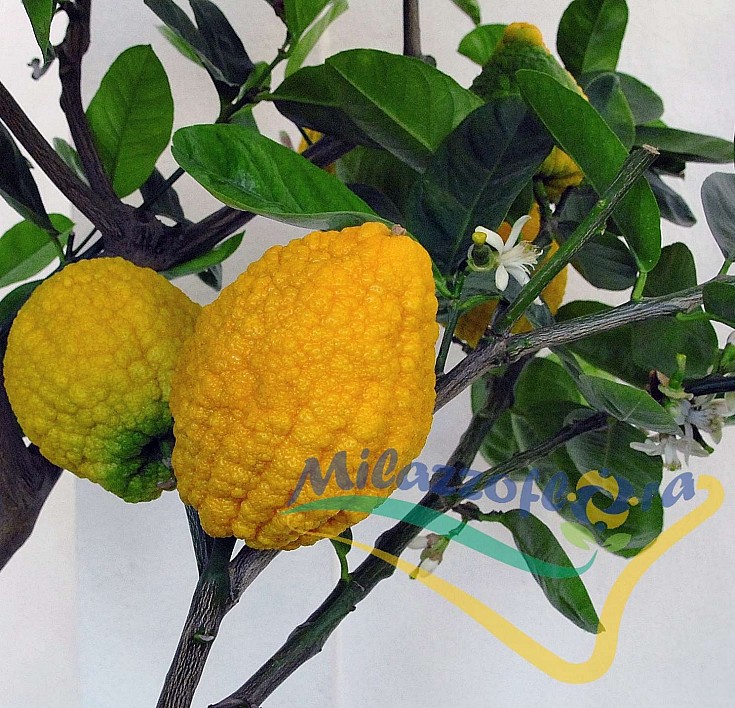