The plant is best known for the edible flower buds (capers), often used as a seasoning, and the fruit (caper berries), both of which are usually consumed pickled. Other species of Capparis are also picked along with C. spinosa for their buds or fruits. Other parts of Capparis plants are used in the manufacture of medicines and cosmetics.

Capparis spinosa is native to the Mediterranean. It is native to almost all the circum-Mediterranean countries, and is included in the flora of most of them, but whether it is indigenous to this region is uncertain. The family Capparaceae could have originated in the tropics, and later spread to the Mediterranean basin. The shrubby plant is many-branched, with alternate leaves, thick and shiny, round to ovate. The flowers are complete, sweetly fragrant, and showy, with four sepals and four white to pinkish-white petals, and many long violet-colored stamens, and a single stigma usually rising well above the stamens. The caper bush has been introduced as a specialized culture in some European countries in the last four decades. The economic importance of the caper plant led to a significant increase in both the area under cultivation and production levels during the late 1980s. The main production areas are in harsh environments found in Morocco, the southeastern Iberian Peninsula, Turkey, and the Italian islands of Pantelleria and Aeolian Islands, especially Salina. This species has developed special mechanisms to survive in the Mediterranean conditions, and introduction in semiarid lands may help to prevent the disruption of the equilibrium of those fragile ecosystems. 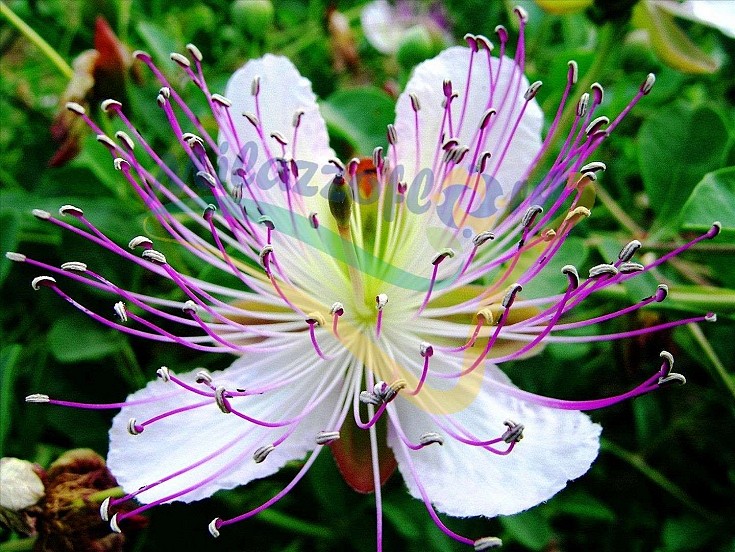